5 MORE Things I Miss About Weighing Over 300 Pounds

“I used to weigh more than 300 lbs. I smoked like a house on fire, I drank like a blues guitarist, I ate whatever I wanted whenever I wanted, and I never, ever exercised.”

So began my piece on self-acceptance titled “5 Things I Miss About Weighing More Than 300-Pounds.” In the two years since that piece ran, thousands of women have gotten healthy with my support. In honor of the self-acceptance and self-compassion that make wellness possible for me and women like me, here’s 5 MORE things I miss about my 300-pound body.

When I was fat, my belly and hips made perfect shelves for baby cousins, nieces, and nephews. Gravity did all the work, so I didn’t think twice about holding those snugglemuffins for hours. I’ve had two kids of my own since I lost over 150 pounds. I’ve spent many nights walking circles with an infant in my arms, wishing I could have my old body back for just 5 minutes so I could give my tired arms a break.

My personality didn’t change when I lost weight, but how people felt about it changed – a lot. Fat Me reliably got laughs, but Fit Me is a lot more likely to be seen as “too intense” or “over-confident” – especially by strangers. I miss being myself, speaking my mind, and letting the jokes fly without wondering who I might rub the wrong way.

When I was fat, I took for granted that the folks who were into me were actually into me – all of me. As I lost weight, more and more people seemed attracted to me for my looks alone. At first, I lapped up the attention like water in the desert. Once I finally settled into my new, thin body, I missed knowing to my core that the person holding my hand was holding all of me, and not just the part they could see.

In some ways, being fat made me tougher and more resilient. The extra bulk meant I rarely got cold, had a high threshold for certain kinds of pain, and held my liquor like a pro. Now that I’m thin, I shiver when the temperature drops, beg for mercy when I so much as see a tattoo gun, and catch a buzz from a thimbleful of liquor. Thankfully, I’m mentally and emotionally tougher than I once was – a girl’s gotta compensate somehow, y’know? (Ha!)

As a kid, I was relentlessly judged, bullied, and often beaten up for being big. As I got older, folks continued to judge me for my weight, but they rarely said – or did – anything about it. Weirdly, people seem to judge me to my face a lot more since I lost my weight. Rarely does a day pass without someone commenting on anything from my boots (“You’d look nicer in heels.”) to my body (“Wow, you really are big boned, huh?”), the way I talk (“Cursing is such a turn-off.”) to the colors I wear (“Black? Again?”). For the most part it doesn’t bother me. Sometimes it makes me mad enough to spit. (“Ugh! Spitting is SO unladylike!”) (Ha!)

It’s been two years since I wrote “5 Things I Miss About Weighing 300-Pounds,” and I continue to be the luckiest person I know, in large part because my personality and perspective were developed in the context of being a fat woman. 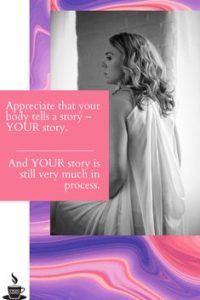 I am privileged to have clients all over the world today, helping each one love herself no matter what she weighs or how far she is from her goal, because it is only by caring for ourselves – past, present, and future – that we can create (and maintain) healthy, comfortable bodies, and lives we love living.

OMG why aren’t you following me on Facebook yet? Jesus.