Why Some Accountability Groups Fuel Self-Sabotage

Accountability groups – online and IRL 1 – are supposed to help us make positive change. Here’s why so many end up fueling our self-sabotage, and doing us more harm than good.

Do you belong to any accountability-type groups or online ‘wellness’ communities? Lots of us join Facebook groups and other kinds of communities because we want support around developing healthier habits. Unfortunately, that’s not usually what we get. More often, these groups and the people in them fuel our self-sabotage, especially if the group is free and open to anyone who feels like joining.

These folks are known for complaining that they can’t “do it” or they don’t “get it,” sometimes a lot, and so we get irritated. Eventually, we stop checking in because we just don’t want to read their crap.

These folks present as though they’re doing it absolutely perfectly, absolutely all the time, with no effort 2 and so we resent them. 3 Without support or guidance from an understanding, active moderator, we get trapped in comparalysis, and decide we can’t ever do it that well, “So what’s the point?,” and so we stop checking in.

Comparalysis: inaction brought on by comparing ourselves to others #motivation 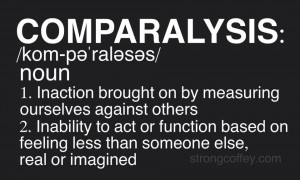 These are the folks who seem hell-bent on not doing the work (what the hell are they doing in an accountability group?!), or on gaming the system, and that nurtures the part of us that doesn’t feel like doing the work, either. Eventually, reading something they post “reminds” us that we don’t actually care about developing the new habit, 4 and so we quit.

And, if the group is large and free-to-join, odds are some angry 15-45 year-old guy is lurking in there, 5 reading everything we post, gathering information, and waiting for an opportunity to say something awful and offensive, and to keep saying it until the moderator (if there even is one, and there often isn’t) kicks them out. Not only does this guy ruin the group, he also has the potential to make us think we’ve been “shown” how dumb we were for even trying to change.

What Kinds of Groups Should I Be Wary Of?

Use caution in free-to-anyone-just-click-to-join! “accountability” groups – unless it’s the exception to the rule,  groups like this are likely to attract resolution-makers, fly-by-nighters, and folks who aren’t taking the effort as seriously as you are, or would be more likely to be if you were surrounded by folks who were committed.

Consider what motivates you, and what stops you dead in your tracks, before joining a “post how many miles you ran today!”-type group. Unless you’re consistently inspired by watching other people claim to be doing “better” than you, seeing other people’s progress every day may make you feel like a failure and a fraud, and may make you want to hang up the running shoes before they’ve even hit the pavement.

Think twice before signing on to a weight-loss-focused, “how many calories / how much food can I eat and still lose 20-lbs by summer!?”-type group, because these tend to miss the point entirely. Unless you’re a blessed eater, someone who loses excess fat – and keeps it off – the moment they’re given a portion-controlled meal plan, groups like this will likely only distract you from addressing what’s actually stopping you from making lasting change.

Not sure what’s keeping you from making lasting change? You’re in the right place. Get comfy and have a look around.

YOU ARE 100% CAPABLE OF MAKING HEALTHY, SUSTAINABLE CHANGE IN EVERY SINGLE ASPECT OF YOUR LIFE.

And the instinct to get support while we make those changes is a strong one: we develop habits more quickly in a community.  Just like our unhealthy habits didn’t develop in a vacuum, neither will the healthier habits we’re trying to adopt. It makes sense for us to get support and be in community with like-minded people – but not every group is gonna get us that.

Our bad habits didn’t develop in a vacuum. Neither will healthier ones. #fitness

It’s up to us to find and give ourselves permission to use tools that ACTUALLY work 6 – whether we’re trying to fix a car, build a house, maintain a relationship, or develop a consistent exercise routine. It’s up to us to make stronger choices around where we get our information, 7 and around what groups we join.

Exclusive groups are often safer, usually smaller, and tend to attract more folks who’re committed to doing the work. It’s hard to be a tool when everyone knows your name, and almost no one pays actual money to attack people anonymously.

2. It’s Actively Moderated By Someone Who’s Committed to the Mission

When an owner or moderator is deeply invested in a group’s mission, the group gets cared for, and its members are supported. Self-sabotage, unproductive navel-gazing, and self-harming justification is kept to a minimum so that the group can remain an effective tool. Caring, thoughtful, and personally-invested owner/moderators keep shame-based quicksand out of the group conversation, or they use the rare thread of it as an opportunity to shed light on the mental gymnastics that keep us from making change.

For an online group to feel like a community, people need to be using it. If we’re committed to making a hankering a habit, whether it’s around business or nutrition, we get there faster if we work on, or at least think about, our commitment every day.

Every day I moderate a super-exclusive group for folks who’ve taken my course. I began the group because, in my own experience, most online communities de-volve pretty quickly into uninspired gripe-fests, where people spend more time talking about why they aren’t making more progress than they do talking on about the pleasure they get from whatever progress they have made. 8 These gals aren’t subscribing to an “accountability” group – they’re members of a tribe with a mission – a mission to get happily grounded in healthier habits. What specific habits? That’s unique to each member, because each member is unique, 9 but the tools we – the folks in my groups, and in other strong groups – use to get there are universal: they’re the tools that dismantle self-sabotage, and use the same raw materials to build caring defaults.

Have You Found, or Started, a Strong Group?

Are you already part of an online community that’s exclusive, moderated, and effective? 10 If you are, please reach out and tell me about it. I’m in the process of curating a list of such online communities, so I can provide an easy-to-access resource list for my group. Thanks in advance for reaching out!