Whether or not you identify as an addict, craving is a distraction, and distractions can kill.

It was 2004 and my whole family was at a restaurant talking and laughing. I couldn’t get out of there fast enough. We had buried my grandmother just hours before. I had a three-hour drive ahead of me, and I just wanted the day to be over, to be able to relax. To do that, I had to have what was waiting for me in the fridge. In my apartment. Three hours away. 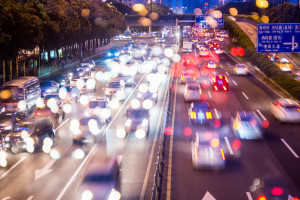 I should have been paying attention.

I should have been thinking about my driving, or at least about my grandmother but, as I hit the blinker to move right, I was thinking about how much __________ I had in the fridge, and whether that would be enough on a night like tonight, and where I’d go to get more of it if I needed to.

I looked over my right shoulder to the middle lane on the Grand Central Parkway. I was crossing the dotted white line when a van I hadn’t seen came hurtling toward me. We were about to collide, so I cut the steering wheel back to the left. About to hit the thick highway fence, I cut back hard to the right.

Next thing I know, my car is spinning across the parkway at 60 miles an hour.

And that should’ve been my last thought.

I slammed to a stop in the center lane facing oncoming traffic. Hundreds of cars traveling west  on the GCP stopped short to avoid hitting me and each other. For a second that lasted a hundred years, I watched the cars stop on a dime like dominoes falling in reverse.

I made eye contact with the drivers nearest me in each of the three lanes. They’d been paying attention, they’d been present while they were driving, and that was the only reason I was alive.

Thank you, I thought.

You’re an idiot and you’re making me late, they thought, and then leaned on their horns.

I turned my car to face the right way and continued home. I thought “I should pull over and get myself together,” but I didn’t. I needed my fix, my stress-relief, my peace, now more than ever. And it was still three hours away.

I’d come about as close to death as anyone ever comes. A big fat life lesson was sitting on my fucking face. And all I could think about was getting home so I could relieve my craving.

The worst thing about having addicted parents is that they’re forever distracted. The same applies when we’re the addict, regardless of what we crave: Certain foods, alcohol, scratch tickets, drugs, cigarettes, or even TV. Of course, the list goes on and on.

Distraction (often in the form of craving and regret) can be just as devastating as the acute physical, mental, and emotional effects of addiction. In fact, distraction can be worse. While it may take decades for our liver to fail, our teeth to rot, or our heart to up and quit, distraction can set in early and plague us every minute of every day.

It can make us miss the bus.

It can make us forget to keep a promise.

It can make us spin our car into oncoming traffic on the Grand Central Parkway.

And it can make us feel disconnected from the life we’re living, the people we love, and the bodies we’re privileged to have.

“Surely you’re not suggesting that getting distracted can be as dangerous as getting wasted?!”

It’s not a suggestion – it’s a fact. My life wasn’t in danger that night because I was drunk or high.

My life was in danger because I desperately craved relief from a need that gets stronger and deeper every time I try to satisfy it.

Craving consumed my attention that night, pulling me off course like Odysseus’s sirens.

Do you even read, Bro?

If you have what I have, and your life feels like it’s being ravaged by distraction, now’s not the time to freak out.

You don’t have to stop doing what you’re doing.

You don’t have to quit.

You don’t have to try to moderate, measure, or weigh.

Or get all spiritual ‘n shit.

I’ve been where you are (deep in the trenches of a wanting that took me out of my life) and my suggestion is this: Consider just paying attention today to how your cravings for Whatever-The-Hell-It-Is impact your ability to stay focused on and engaged in the present moment.

Pay attention to how being away from the object of that craving makes you feel about the rest of your life – like your work, your family, and your other obligations.

Pay attention to how loud and how often the siren calls.

Pay attention to how that tug neutralizes any goals you might have to make a healthier choice.

To loosely quote a popular saying, when you’re ready to learn how to keep your eyes on the road – and actually enjoy the ride – the tools you need to get there will appear.