Now Slowly Back Away From the Scale

Getting on the scale contributes to our inability to lose weight and keep it off.

I’m eight, sitting on the floor of a hotel room in Orlando. I’m on vacation with my grandparents, and we’re watching the Miss America Pageant*. At some point in the spectacle, Miss New York, my home(state)girl, wisps across the stage as her stats pop on the screen: 22 years old, 5’10”, 126 pounds. 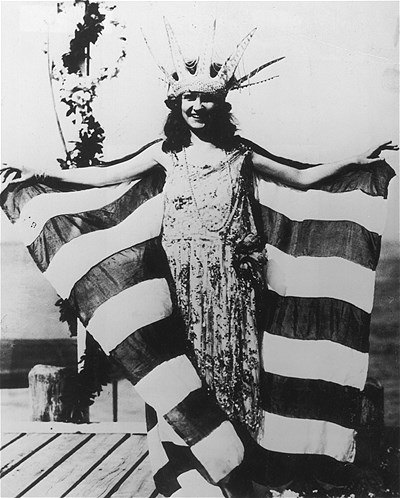 Margaret Gorman of Washington, D.C., was the first Miss America in 1921. The Miss America pageant was first devised as a way to extend the summer tourist season in Atlantic City, N.J.

After that vacation I see my first of many “weight doctors.” From that appointment forward how much I weigh and how I feel about myself get grossly convoluted. Suddenly, I look to my daily and weekly weigh-ins to tell me whether or not I’m a good girl. Every time I step on a scale it’s like spinning a dystopian Wheel of Fortune – the needle settles on a lower-than-expected number and I’m all Oh what delights the universe holds! A higher-than-hoped-for number, and I’m instantly banished to the depths of my newly acquired hobby: self-hate. This series of unfortunate events persists for what remains of my childhood. 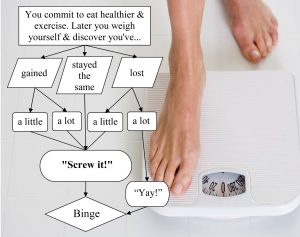 The adults in my life at that time wanted the best for me. They didn’t want to see me go through the same bullying and anguish and torture they had endured as “fat” kids. They were putting me on the scale to give me information that they, and most of us, mistakenly think will be helpful: this, Dear, is how much you weigh. Depending on how that varies from how much you weighed last time, you’re either on track and you should keep going or you’re off track and you should buckle down.

Well isn’t it pretty to think so. 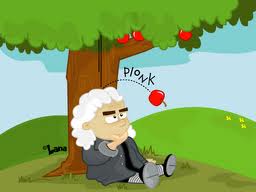 “Hmm…I wonder what I weigh.”

My friend Emily likes to say that a scale can only tell you how hard gravity is pulling on you, nothing more. She’s right, of course. What’s problematic is the feelings those numbers inspire.

Just about everyone has, at one time or another, read a number in that little window that was higher than they had hoped or expected it would be. The last time that happened for you, did you read that number for what it was: an indication that gravity was yanking on you a bit harder than you’d like? Did you shrug it off, buckle down, and carry on? Prollynot. If you’re like I used to be, that higher number started you at stage one in the five stages of grief: Denial, or “This can’t be happening to me.” Once you got to stage four, Depression, your internal monologue likely shifted to something more along the lines of “I’m fundamentally broken and nothing will never fix me and it’s all lost anyway so what the hell am I doing anything healthy for, SCREW IT.” 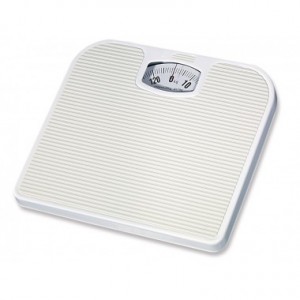 Scale: $9.99. Realizing it robs you of any chance you might have of true self-acceptance: Priceless.

And then there’s the ever-hoped-for weigh-in that shows loss. If you lost a little and you’re not so skilled in the gentleness-with-self department, you probably manage to turn that into fuel for self-flagellation. Even when the scale shows a bigger-than-hoped-for loss, all we get is a cheap high, a momentary thrill, and ultimately, a higher emotional precipice from which to drop the next time we weigh in a little high.

If we, the obese, we, those with addictive tendencies toward food, we, women, we, human beings, are truly committed to improving our health from now until the final curtain call, we must limit ourselves to real, tangible, meaningful measures of health and wellness. Our first assignment: Throw away the scale.

Free yourself: throw away the scale. #weightloss #mentalhealth #motivation

You won’t. And it will be incredibly liberating.

Instead, you’ll focus on how you feel. How your body feels, how you feel in your clothes, how you feel when you sit in your car. You’ll feel how it feels to hug your friends and to tie your shoes. And you know what? The only thing that matters is how you feel. Because the number on the scale is an abstraction. It’s a useless measure of the force of gravity. The number doesn’t tell you you’ve been loving toward yourself in truly healthful, nurturing ways and that you should keep that up – only you can do that. The number doesn’t tell you that practicing self-love this week totally meant declining that social invitation because you need to sleep more, not drink more and eat more crap – only you can do that. The number doesn’t tell you that your head is in the right spot and that that’s all that truly matters – that can only come from inside YOU. We get on the scale because we’re convinced that the number we’ll read there is important. Not only is it unimportant, knowing what that number is will help fuel your next binge, or whatever the moral equivalent is for you. Every step onto a scale is a stride on the road to self-abuse.

Don’t be surprised if you feel cut off from a drug when you stop weighing yourself. Old patterns of and justifications for self-abuse die hard, and this is no exception. The second assignment: Notice how deeply you long to know that number. After the tightness in your chest passes without you having stepped on a scale, please take a deep, congratulatory breath.

Top photo: Margaret Gorman of Washington, D.C., was the first Miss America in 1921. The Miss America pageant was first devised as a way to extend the summer tourist season in Atlantic City, N.J.