Telling it like it is doesn’t have to mean embracing our own defeat.

My hair was sticking to the back of my neck and arms. My shorts and t-shirt were damp. I was on the sidewalk in front of our building, moving Barbies from one concrete square fantasy world to another.

I was having fun, but my mother needed a break. Maybe a cigarette. Maybe a beverage. Maybe more sleep. Maybe just time alone. 1

“I’m not tired, Mommy,” I said, doing my best to keep dragons from eating princesses.

Never one for patience, she went straight for the ace.

“If you take a nap right now, we’ll go to the park after you wake up.”

The park? The PARK! We almost never went to the PARK! My brain nearly short-circuited trying to imagine all at once everything I could do at the PARK! Would I spend more time in the grass, or looking at the East River? Would I swing, or would I play hopscotch? Did I still have that sweet hopscotch piece – the wooden one with melted wax on it to give it some weight? I could maybe even swim in the pool!

My imagination came alive like a package of Pop Rocks in a mouthful of Coke.

“OK!” I said. I left the princesses to fend for themselves, trotted into our apartment, into my little room, and into bed.

When I woke up, the sky was dim. I remembered the promise of the park and ran into the living room.

I saw my mother sitting in front of the TV. My heart sank.

“Can we go to the park now?” I asked in a little voice, hoping it sounded polite enough and not-annoying-enough.

“Obviously your body needed it.”

“One more word about it and no TV tonight.”

Standing there, I felt something like big, strong hands wrap around my heart and lungs and squeeze. I felt achy tension in my lower back. It was the felt sensation of disappointment, of powerlessness, and of betrayal. And rage.

My body was flooded with rage, which most women like me eventually realize is just fear wearing big girl pants and trying not to cry.

My brain linked the feeling and situation. Rage with mother. Powerlessness with mother. In that and other early life moments I took on a role that became familiar – victim. 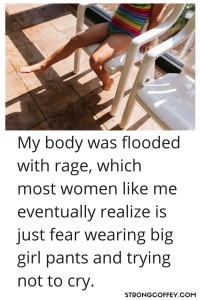 I grew up. Sometimes, I didn’t get the job. I didn’t get invited. I got dumped. I got stranded on I-95 in New Haven with smoke pouring out from under the hood of my POS car. I didn’t lose weight or I gained back the weight I had lost. When these things happened, I’d get angry at myself, and often how I coped with that anger was to assume the role of victim, and blame my situation on someone or something outside of myself.

Sometimes that someone was my mother.

Placing blame felt good for a second. It took my mind off the discomfort in my body – the sensation of rage and all its parts 2 – but, ultimately, as is the case with so many quick-acting, channel-changing “coping strategies”, placing blame only made things worse.

I was not treating myself well 3 and blaming that on someone or something else only helped me feel justified in continuing to treat myself like crap.

Blaming other people for our situation is one way we react to shame, the feeling that we are broken and fundamentally flawed. Our knee-jerk reactions to shame keep us stuck in old patterns, sabotaging our efforts to eat better, to move more, or to treat ourselves with care in a million different ways.

Click HERE to see the schedule for my FREE, ONLINE workshop,
Why We Sabotage Ourselves with Food and What We Can Do About It 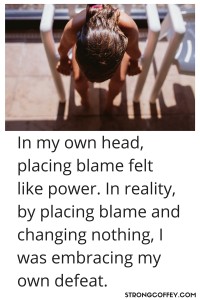 To break out of the cycle of shame and self-sabotage, we can practice becoming aware of our tendency to blame others. Once we’re aware, we have a choice – to stay in the victim role and change nothing, or to exercise the power we have in this moment to make another choice, and in doing so, create positive, if incremental, change.

The next time you get mad at yourself for not eating as well as you’d like, instead of blaming your parents for modeling piss poor eating habits and then hitting the drive-thru, you might choose to drive yourself to the grocery store. Once you’re there, you can buy the best food your budget will allow. It may not be much, but it will be an improvement.

The next time you get angry at yourself for not working out as much as you’d like, instead of blaming your ungodly work schedule and sitting in front of the TV, you might choose to go for an evening walk. It may not be much, but it will be activity your body desperately craves.

The next time you get mad at yourself for oversleeping and “wrecking the day,” instead of blaming your mom for not giving you enough time / love / attention to keep you from feeling like a basket case all the damn time, you might choose to hop out of bed and bring yourself to the park. Yes, The PARK!

I’m not saying your rage isn’t justified. It probably is. Maybe your boss doesn’t pay you enough to eat as well as you’d like to or think you should. Maybe there isn’t enough time in a day for you to exercise “perfectly.” Maybe your mother didn’t give you the love and attention you needed to develop strong self-care practices and unshakable inner peace. Me neither. If life has dealt you a less-than-ideal hand, moving out of the victim role and dropping blame can feel next to impossible.  If it does, cut yourself some slack. Don’t try to do it perfectly. Just try to take better care of yourself in meaningful, reasonable, do-able ways.  This dropping blame and nurturing self-care thing is a practice. Let yourself be a beginner.  Give yourself, and the process, time. 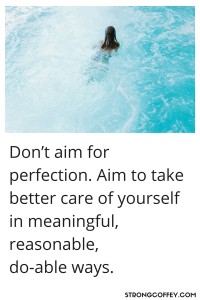 And if you don’t believe me, try acting like it until you do. (wink)

WHY DO WE SABOTAGE OURSELVES WITH FOOD?

We all feel stuck in the cycle of self-sabotage, out of control and powerless. I put together a workshop to give you practical, actionable next-steps to ensure that you feel healthier and more in control, starting now.

WHY DO YOU CONTINUALLY SABOTAGE YOURSELF?

Wonder why you stumble when you make a commitment, especially around food? Grab my #1 Strategy to stop spinning your wheels, and start making real progress. Hit me with your email. No spam - I promise.