I’ve been thinking about my drinking for a while, and whether or not I should stop. A little about me: I’m a single mother with two young kids. I had weight loss surgery 10 years ago and I’m struggling not to gain all my weight back. I’m busy, I’m stressed, and I’m lonely. Last weekend I went on a first date with someone I like a lot. I was nervous and wanted to make a good impression. I drank more than I knew I should and let things go further than I wish they had. I woke up the next day full of shame. Had I embarrassed myself in front of him? Why had I let him see my body so soon (it’s far from perfect)? Had I ruined my chance at a future with him? I don’t drink every day but, when I do, I drink more than I plan. I think about stopping, but I don’t know if I’m capable of socializing – let alone dating – without a buzz to take the edge off. You don’t drink anymore, but you seem confident and funny all the same. When did you stop drinking? How did you learn to socialize without it? How do I shake the shame I’ve felt since the morning after that date?

In my early 20s I remember thinking, “Without alcohol I can’t relax or have fun. For the sake of my own joy, I can never stop drinking.” 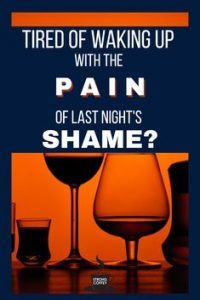 I was single, living alone in a New England apartment with cracked windows and a ceiling that had to be propped up with 2 x 4s when it rained. During the day, I sat at my wheezing, whirring computer trying to make enough freelance money to live on. At night, feeling I’d earned my right to relax, I got gussied up and went to the bar. 1

One night, I met a guy with a beard, a halfway decent job, and the outlandish ego we’ve come to associate with mediocre white men. 2 He liked me, so he bought me drinks. The more buzzed I got, the easier it was to smile and nod when he bragged about how creative and funny he was.

For a while he bought me drinks, but that was all. “This is fine,” I thought. Until one morning, I rolled over to discover his beard – along with the rest of him – in my bed. I had no memory of leaving Ye Olde Watering Hole the night before, but it was clear that I had let him come home with me. I wanted to rip off my skin and burn it. I wanted to detonate a bomb on the last 24 hours. Limited by biology and physics, instead I dragged myself into the shower. I stood in the hot water grinding my teeth until I heard the door to my apartment open and close.

Around the same time, I met Lauren, a redheaded hippie-type who smoked Marlboro Lights and listened to Ani DiFranco and The Cure. I wanted to hang out with her, but when she told me she didn’t drink, I started searching for clues that she was miserable. Pitiable. Lame.

I glorified assholes and demonized angels, all so I could feel OK about my drinking. 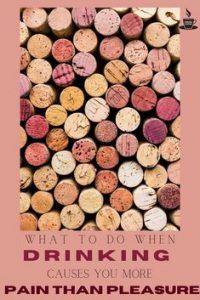 Beard boy wasn’t my first catastrophic screw-up. I’d been feeling like shit in The First Minute of the day since I’d started bingeing – on alcohol, food, and whatever else I could find – in high school. 3

Eventually, the pain of waking up ashamed of what I’d done the night before collided with the fact that the handful of people I knew who didn’t drink appeared to be doing well – even enjoying themselves.

They certainly LOOKED happier and sexier than the drinkers. Especially the ones over 40.

Now, remember: I’m a hedonist, a pleasure-seeker – I want to feel as good as possible as often as possible for as long as possible, PERIOD. By the time I was 25, I’d drunk so much and so often that the truth was hard to ignore: Drinking caused me more long-term pain than short-term pleasure. 4 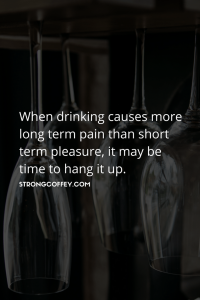 I still thought my life would be over if I stopped drinking, but suddenly I didn’t care. I would’ve preferred a life of quiet isolation to the sick, suffocating, regret-saturated chaos I existed in when I drank.

As is almost always the case, my fear was worse than the reality.

Once I stopped drinking, things got better. Quickly.

I asked the landlord to fix the roof. 6

In time, I learned that I could, in fact, enjoy myself socially without drinking.

Just like riding a bike, it’s the kind of thing you can’t learn – and can’t possibly get good at – unless you practice.

And yes, practicing socializing without alcohol becomes much easier after you stop drinking.

I can’t tell you if you need to stop drinking, or that life will get better if you do.

That’s something only you know.

You also asked what you can do to shake the shame you felt the morning after your date, so here’s my advice:

First, consider whether you said anything mean or rude to the guy. If you did, own it and apologize. But it sounds like you messed up because you showed him your body before he’d been properly vetted, before you’d established trust and connection. Getting naked and being intimate wasn’t you being mean or rude TO HIM – it was you being disrespected BY YOU. That’s why it hurts so badly.

So, the real question is How do you make amends to yourself? How do you show yourself respect moving forward? Is breaking up with alcohol a good place to start? If the answer is yes, you’re in good company! (Waves from her current home in New England, where the windows are intact, the ceiling never needs propping with 2 x 4s, and The First Minute of the morning rocks.)

What’s done is done. You’ve disrespected yourself, so those waves of shame are gonna hit, but you don’t have to drown in them. When that feeling hits, acknowledge it. Accept that you’re experiencing it. Then do something radical: Respond with the most caring action you’re capable of in that moment.

That could be hitting a local AA meeting.

It could be just washing the dishes.

Only you can know.

PS: Are you a fitness professional working with folks in recovery (from binge eating, alcohol, drugs, gambling, etc.)? Join me and some of the top fitness pros in the world at The Fitness Summit in Kansas City, MO, May 4-5 where I’ll be delivering my talk Tips for Personal Trainers Working with Clients in Recovery. Register here: www.thefitnesssummit.com