If you’re like I used to be, it’s hard to imagine life without drinking, pills, binges, and/or scratch tickets.

And who would want to? That shit is awesome!

Sadly, for those of us who don’t believe in God, and especially if we have negative associations with the whole God thing, walking into “God”-heavy 12-Step meetings is the genesis of a whole new struggle. 1

Take me, for example.

I was raised Catholic. As a kid I believed in God because I was taught to.

Then, months before I made my confirmation – plot twist! – I got wrapped up in a cult. Why? Because the people there acted like my fat, acne-covered, awkward self belonged. It felt so good to belong – to be liked – that I dove into their programming with all the fervor of a teenage girl.

Claiming to be the one true path to the Almighty, they dictated who I spoke to, what I did, and how I spent my money and my time. I stopped interacting with most of my family, cut myself off from the few friends I had, and lived a very small, cult-controlled 2 little life.

When, in an unlikely fit of adolescent reason, I decided to “fall away” – their term for turning your back on the church, and therefore, salvation – other members made my life a nightmare.

I was 13 and being held captive by adults I couldn’t fight or get away from.
“Your soul will burn for eternity,” they said.
“You will suffer in unimaginable ways.”
“The deepest, darkest, most painful level of Hell is for those who know the truth of God and walk away from it. You’re going there.”
“If you are not a part of this then you are already dead.” 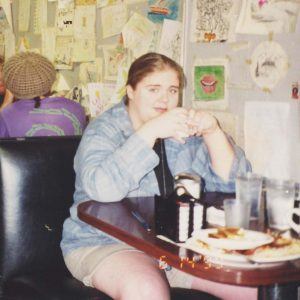 There were no good photographers in the cult, so this is me from a few years later.

The next year was hell. In what I know now was an effort to survive, I started drinking, doing drugs, and bingeing like a wild animal, all to change the channel in my head to something different. More pleasant. Less awful.

Consuming everything made me feel like I was in control. It gave me brief relief from my stress, strain, and trauma.

Running from my pain moved me so far away from myself that, eventually, my every smile was a lie.
No matter what I swallowed, I was empty.
No matter who I was with, I was alone.

I didn’t want to die, but I couldn’t imagine life without the things that were killing me.

Have you ever said that to yourself?
You believed it, too, huh?

A couple near-death experiences later, I was all, “I think I have a problem.”

I walked into a church basement and sat down, eyes on the floor.

The word “God” got said about 50 million times.

It would have been so easy to walk out. Every God mention sparked anxiety. Panic. Rage. Memories of people scream-crying over the fate of my damned soul. But I was curious about the people in the room. They claimed to have what I had, but they were all laughing and having a good time.

I could’ve climbed the stairs and spent the rest of my life numb, wrecked, or flitting from one drug-pushing treatment program to another until my money and soul were well and truly gone.

Instead – and it was because of the laughter – I stayed.

But this “God” thing would not do, so I got creative.

Getting creative with the God thing

I went to meetings every day. When someone said “God,” I edited in a good, old-fashioned “BEEP.”

I tried to stay open to everything else. People’s stories, suggestions, and kindness. 3

When folks talked about choosing a Higher Power that felt right to ME, I heard it.

“No need to believe in BEEP, for BEEP’S sake. Especially if you have negative associations with BEEP. The BEEP of your understanding is all the BEEP you need.”

I soon decided my Higher Power was Love – the glimmer of Love I felt the day I decided to do what I needed to do so I didn’t accidentally kill myself.

Thanks, in part, to 12-Step recovery – and my willingness to name my own Higher Power – I eat like a normal person, I’m fully alive when I’m awake, and me and my liver are cool. I’ve broken the cycle of addiction in my family and have (at least) a shot of not passing this nonsense onto my kids.

That Higher Power, Love, is everywhere. It doesn’t want me dead. It wants me to laugh. Make out. Write this. And help women who relate to my story come back to themselves.

If you’re an atheist or agnostic, or you’ve been burned by folks who claim ownership of God 4 and you think you might benefit from a 12-Step program, remember this: You’re not alone. 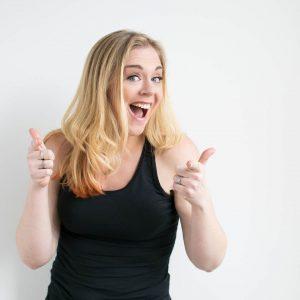 I am NOT this peppy. But you ARE NOT alone.

Addiction is a disease of isolation. Connecting to something outside of yourself – a Higher Power and/or 5 a community of folks on the same path – can be a catalyst for change, and the difference between living a happy, healthy, productive life, or dying. 6

Don’t let one little word keep you from doing what you need to do to take care of you. Be creative. Give your Higher Power whatever name, shape, and personality you need to so it feels right.

And, if you’re stumped, you can always use mine. 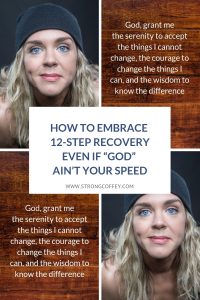